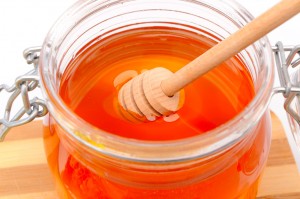 What is Buckwheat honey?
Buckwheat honey is made from pollen gathered by bees that visit the buckwheat plant. Differently from other honey, it is very dark in color. It also has a much stronger taste and smell than other types of honey. The dark color of honey means that it contains a richer variety of minerals and antioxidants than other.

The health benefits of Buckwheat honey
Many people prefer buying raw honey for its health benefits, mineral content, as well as taste. Additionally, some buckwheat honeys are not completely made of pure buckwheat. A person can tell that the honey is truly buckwheat by looking at the color. It should be very dark and almost opaque.

More about Buckwheat honey
The term buckwheat may seem confusing because actually it has nothing in common to wheat, and is a flowering plant. Buckwheat plant produces pink flowers that attract bees. This type of honey is produced in some of northern U.S. states as well as in Canada. The buckwheat plant is a one-year plant, it is no longer grown as much as it once was, so many honey producers in states like Ohio and Pennsylvania grow it specifically for honey production rather than for use as a flour.